Out of the 11 S&P 500 sectors, only Materials finished in the green for the week thanks to big Friday moves. The bullishness was broad-based as many of the industries within the Materials sector finished strong. One the better performers on Friday was Vale SA (NYSE: VALE), which finished 5.32% higher on the session and broke resistance. 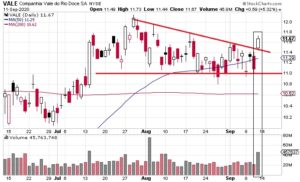 Vale produces and sells iron ore pellets that is used in steel making. While the company focuses on ferrous metals, they also produce base metals like nickel and nickel extracts like copper, gold, silver, cobalt, and other precious metals.

One of the issues the company has had is that the analysts have been too bullish on the earnings of the company over the past four quarters. The company has missed analyst estimates in every quarter in the past year. However, analysts find themselves raising EPS expectations for the coming quarters and next two fiscal years. The bottom line is that this company may not be beating estimates, they are still growing their earnings year-over-year.

The share price for Vale has been consolidating for the past two months. Since the July 29 high, the price has formed a series of lower highs on declining volume. During that time the price has worked hard to hold on to its $11 support.

On Friday, the price broke out as it cleared the September 1 high of $11.59. The 5.32% move happened with volume nearly twice the average and on a day when the sector was breaking out. The sequence of events that happened leading into Friday’s move is very bullish near term.

Option traders may want to consider buying the 16 OCT 12/13 long call vertical for around $0.21 or less.

Investors in Search of Yield Found International Paper on Friday