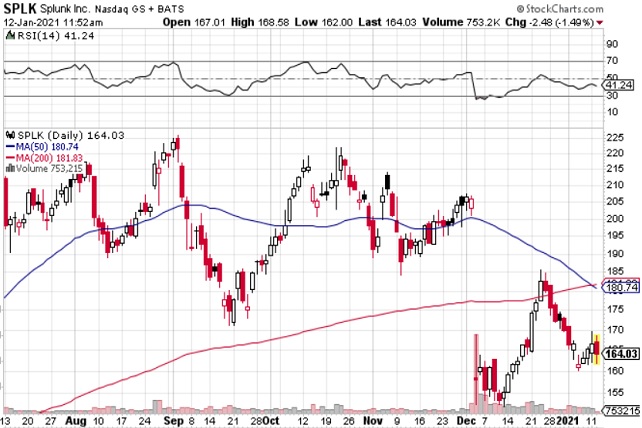 Shares of cloud-based tech company Splunk (SPLK) have been trending down in recent months. The company’s poorly-received earnings in the prior quarter led to a spat of analyst downgrades. Despite a relief rally in the second half of December, the continued downtrend is now meeting another key indicator showing a decline.

That indicator is a death cross. It’s where the company’s 50-day moving average drops under the 200-day moving average. It shows that not only has the rally in shares been over for some time, but that shares are likely to trend lower.

Even with the recent decline, shares are up 6 percent over the past year. However, the company is unprofitable and trades at 400 times forward earnings.

Action to take: Further downside is likely. As the company may surprise either way when it reports earnings in the first week of March, the best trade may be a put option as far out as May. That will give ample time for the death cross trade to play out.

The May 2021 $140 puts would move in-the-money easily on a further drop in shares of the tech company. Trading at about $7.00, it’s an inexpensive trade that may also work as a hedge against the high-flying tech space as a whole right now as well. Look to potentially take profits as the company reports earnings.