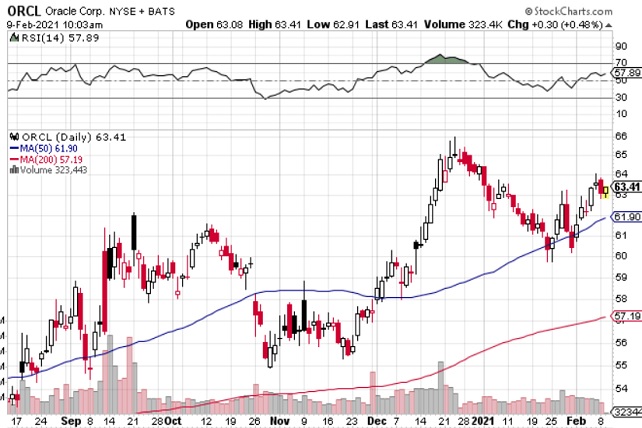 Database giant Oracle (ORCL) has been trading in a somewhat zig-zag pattern in recent months. Shares first started rising in late November, peaked in late December, and are now coming back up after a few weeks trading out of favor.

There are two possible chart patterns at work, and both are bullish over the next few months. The first chart pattern that recent trades resemble is a cup and handle pattern, although it’s a bit more jagged thanks to bigger moves in recent sessions.

This looks more like the third wave in the five-wave pattern known as an Elliott Wave. This kind of pattern suggests another small downtrend before a large uptrend that takes shares to new all-time highs.

Action to take: Even with the possibility of a slight downtrend, shares are near their 50-day moving average and have shown considerable strength when hitting that level before.

The June 2021 $65 calls, last trading near $3.65, are attractive here. The at-the-money trade should move in-the-money as shares rally higher.

Given the chart patterns likely to play out over the next few months, the June strike date is far enough out for traders to target a high-double-digit profit, if not more. With shares still underbought relative to the tech space, this looks like a great play on a company already on the rebound.