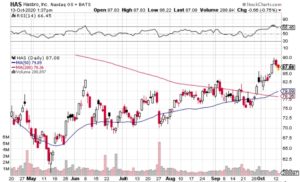 Toymaker Hasbro (HAS) is throwing off two chart patterns right now. While having two signals reinforces a trend, what should traders make of two contradictory signals?

Since then, shares have rallied about 10 percent, just enough for the second, and contradictory indicator. Shares have become overbought. The company’s RSI, or relative strength index, topped 70 before two down days took shares down a bit.

What’s a trader to do?

Action to take: Short-term, shares will continue to decline a bit. But then the long-term signal from the golden cross will take over once shares stop being overbought.

Short-term traders betting on a downside in the next few weeks should buy the January 20211 $75 puts. Trading for about $2.75, another 5-10 percent drop in shares should lead to mid-to-high double-digit returns.

Longer-term traders should consider the April $90 calls. They’re trading around $7.90 right now. But, in the short-term, the continued drop in shares to the low $80 range should allow traders to buy into this option much more cheaply. Look for shares to near their 50-day moving average, or for the company’s RSI to drop to under 50 before buying.