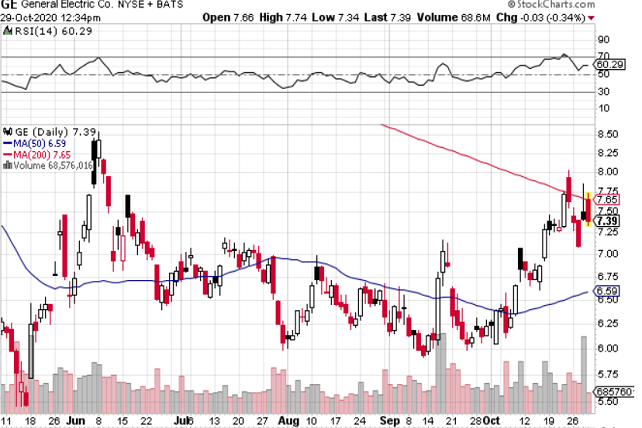 General Electric (GE) shares have been written off by investors over the years. The company had accumulated too many diverse business lines. But over the past few months, the company’s streamlining operations have continued to pay off, and a strong beat on earnings has sent shares higher.

But an unusual chart pattern has now emerged that suggests that the recent run in shares may pause for now. The pattern? A shooting star. That’s a bearish candlestick pattern that appears near the end of an uptrend with a long upper shadow with no lower one. That signal triggered on Wednesday, even as the company reported its earnings beat.

Shares, which have been strong performers this month amidst a dropping market, are likely to give up some of their recent gains as a result. Looking at the company’s moving average, a move down to $6.60, or nearly a full dollar lower in shares, could occur in the coming weeks. That’s a full 15 percent drop.

Action to take: The January 2021 $7 puts are out-of-the-money, but could move in-the-money on a drop in shares. However, trading around $0.53 right now, shares would need to close under $6.50 by late January for the trade to profit at expiration.

Traders should look for some downside in the coming weeks, and take profits quickly. At this price, the option is likely to deliver mid-to-high double-digit profits for traders. This can be a volatile name, so don’t get too greedy.