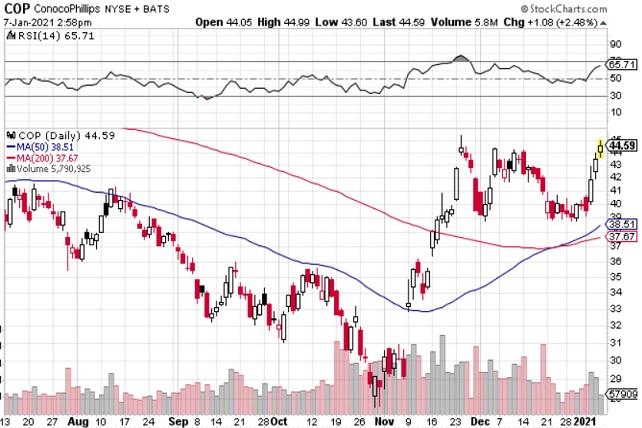 Shares of oil and gas giant ConocoPhillips (COP) have been heading up recently. With talk of oil production cuts, crude oil may hold over $50, which would benefit the company’s bottom line. Even better, an unusual pattern has emerged that suggests the rally will continue.

Shares of the oil giant are still down 34 percent over the past year, even with the recent rally. Revenue is still off 45 percent, but should improve with higher oil prices and rising energy demand.

Action to take: With shares yielding just under 4 percent here, investors may like the name for both income and capital gains in the coming year.

For traders, simply playing the current uptrend with a call option is the way to go. The May 2021 $45 calls are just out-of-the-money. Traders can expect to pay about $4.30 for the option. On a continued move higher, however, the trade should deliver mid-to-high double-digit gains.

The option could even double and hit triple-digit returns on some geopolitical fear that sends oil soaring. But traders should look for an opportunity to take profits before the option expires.