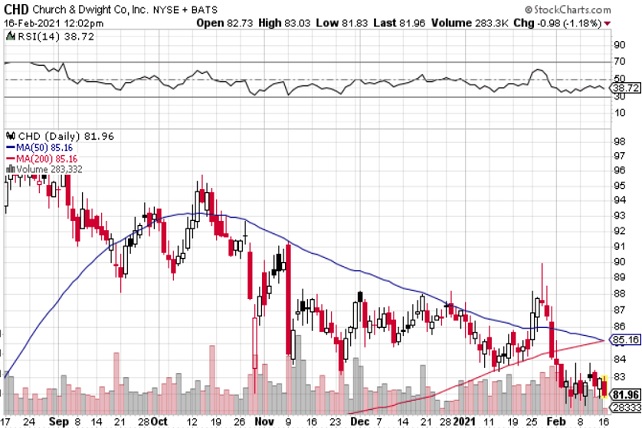 Consumer goods companies held up well in the early stages of the pandemic. However, with the market back in rally mode, these companies have fallen out of favor in the past several months. Some, like Church & Dwight (CHD) look set to drop even lower.

Shares are in a clear downtrend, but the real pattern indicating the trend will continue is a death cross. That occurs when the stock’s 50-day moving average crosses under the stock’s 200-day moving average. With shares already down nearly 20 percent from their peak, the bear market in shares is likely to continue.

In addition to the decline in shares and the death cross, a look at the stock’s relative strength index, or RSI, shows that shares never get fully overbought or oversold. With shares trending down, any move higher tends to be short-lived, as seen with a rally in late January that fizzled out.

Action to take: The August $80 puts trade for about $5.35 and are an at-the-money trade. On a further decline in shares, the trade should move in-the-money. Traders can likely nab mid-double digit gains well before expiration on a continued downtrend in shares. As with any options trade, look to take profits quickly to avoid the option’s declining time value working against the trade.