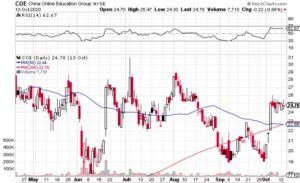 China Online Education Group (COE) has been a top-performing stock in the past year, with a 254 percent rally. But shares have had some choppy trading, and now investors may want to beware this bearish sign.

Shares did jump higher at the start of the month, but the past few trading sessions have seen shares trade somewhat sideways. The death cross suggests that when the sideways trend ends, shares will drop.

Action to take: The company is still a relative small cap, with a market valuation of around $500 million. As such, there are no options to trade. However, there could be a sign that smaller-cap Chinese companies are at a similar risk of selling off.

Traders may want to look at the December 2020 $40 puts on the iShares MSCI China Small-Cap ETF, ticker ECNS. That ETF looks a bit overvalued and is a likely candidate for a modest pullback as well. The puts are thinly traded, but traders should be able to get into the trade for around $2.60. Look for mid-double-digit profits before cashing out, even if it’s before expiration.