Special: The Quiet “Scam” Being Played on the American Public 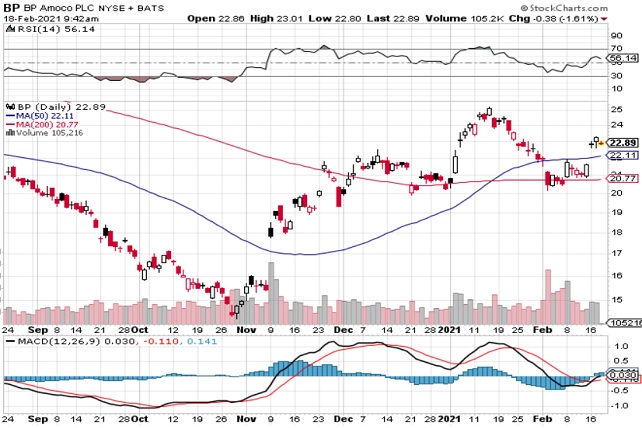 Shares of energy giant BP Amoco (BP) are up 53 percent since early November. Shares have had a few unusual moves along the way. However, a recent gap higher, combined with other indicators, suggests a further rally from here.

One of those indicators is a positive MACD, or moving average convergence divergence. This trend shows that money is flowing into shares, after MACD turned lower in late January.

And with the stock’s RSI, or relative strength index, at about 55, shares have room to trend higher before getting into overbought territory. Also, a golden cross triggered in early January, where the 50-day moving average crossed over the 200-day moving average. Overall, signs suggest that shares will continue to move higher.

Action to take: With a current dividend yield of 5.3 percent, investors may like shares at current prices. The combination of capital gains and a dividend looks attractive.

For traders, the June $25 calls, trading for about $1.50, offer a compelling strike price and strike date. Shares already hit the $25 range in mid-January, so it wouldn’t take much of a move for that to happen again. And the options are low priced enough that they offer high double-digit gain potential, which could also break into triple digit returns.