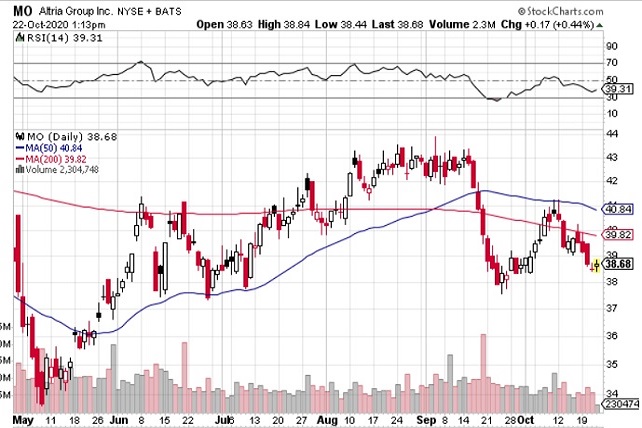 Traditionally defensive stocks have had a tough time in 2020. Amidst economic upheaval, some Americans have been better off, while others have struggled to get by. Consumer products that usually hold up well are faltering. One of those is the tobacco giant Altria Group (MO).

Shares are down 18 percent in the past year, and the company has reported losses in its most recent quarter. Without a turnaround to profitability soon, chances are shares will continue their slide.

In addition to shares trading weakly over the past few years, a look at the chart shows a downtrend clearly in place. Shares just gave off an inverse hammer indicator on Wednesday, the second since the start of the month.

The first hammer pattern stopped an uptrend in place. Now, shares look set to re-test $38. After that, it could be a painful drop down to $34 or lower. Along the way, expect a Death Cross to occur as the company’s 50-day moving average drops under the 200-day moving average.

Action to take: Shares are in a downtrend, and aren’t quite oversold yet. The March 2021 $35 puts, trading for around $1.62, are a solid bet on a continued downtrend in shares. While it would take a market drop or poor earnings to send shares that low, such a move would likely provide low-triple-digit returns on the trade.