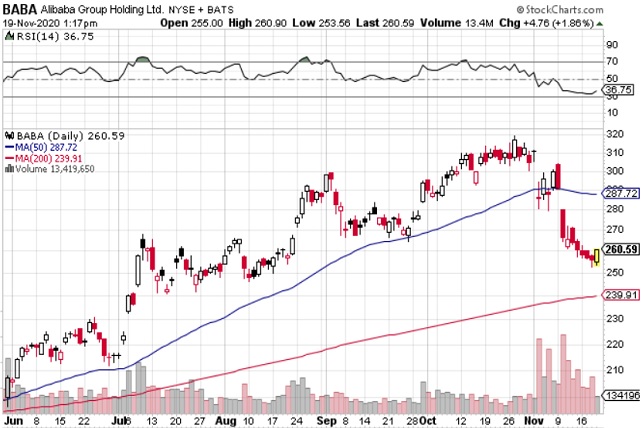 Shares of Alibaba (BABA) have been sliding since the Chinese government pulled the Ant Group IPO. That company is also a brainchild of Alibaba founder Jack Ma. However, thanks to a recent pattern that’s emerged in shares, the worst of the selloff could be over.

That pattern is a hammer pattern, which appeared in shares on Wednesday. It’s a one-day candlestick with a long lower wick and a narrow body that resembles a hammer. It indicates that traders tried to take shares down further, but were unable to do so. Most volume of the day occurred near the highs.

Based on how far down shares have declined, as well as a number of gaps, a 10 percent rebound rally appears likely in the coming weeks. That won’t lead to a full recovery in shares, but will take some of the selling pressure off of shares.

Action to take: Alibaba is a great company to watch, as its role as the Amazon of China makes it prime for trading opportunities. Right now, shares look primed to move back to at least the $280 price from their current price near $260.

The February 2021 $280 calls, last trading for about $13.20, are likely to head higher in the coming weeks as the share price rallies. Traders should look for mid-to-high double-digit returns with this trade. As shares may stall around $280, look to take profits before expiration.