Shares of Bloom Energy (BE) are volatile, but have been on a tear in recent months.

After taking a nosedive from as high as $15 to under $3 in the past year, shares are recovering.

But now, an unusual chart pattern has emerged.

That pattern, a golden cross, is a simple, but effective, tool. It shows the 50-day average moving above the 200-day moving average. 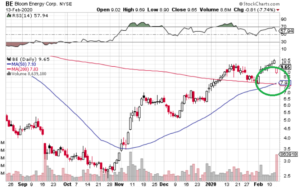 As a bullish pattern, it suggests that the recent rise in shares is just getting started.

With shares under $10 right now, this bullish indicator suggests that the rally will continue.

From here, the trend will likely continue until shares are about to get back to their old highs. That’s typically where a trade will stall, as shares are “retested” by the market before heading even higher.

That still gives investors a chance to see their shares move from under $10 to as high as $15 in the coming months.

For stock investors alone, that’s a 50 percent potential return in the next few months.

Speculators could buy call options as well, to earn a leveraged return from the stock’s likely move higher in the coming months.

The May 2020 $12 calls, currently trading for around $1.10, should move at a much higher rate than the underlying stock, about 2-to-1 at the moment. As long as shares trend higher, the option should rise.

If shares went back to $15, the option would be worth $3 at expiration, nearly tripling.

Given the volatility in shares, traders should buy the option on a down day for shares and look for a smaller and quicker profit in the 40-50 percent range.

The company next reports earnings on March 15th. Shares tend to be more volatile around earnings. Remember, volatility is a two-way street. Shares could move in either direction depending on the earnings numbers and company outlook.