Shares of Automatic Data Processing (ADP) may be about to reverse.

That’s based on a two-day candlestick pattern known as an engulfing pattern.

Essentially, in an engulfing pattern, an up candlestick is proceeded the next day by a large down candlestick that engulfs the prior up candle.

It shows that volume and momentum is starting to weigh on a stock, particularly after a strong uptrend in shares. It’s a reversal pattern, and can show up after a bullish or bearish performance in a stock.

ADP shares have rallied somewhat strong in the past few weeks, up six percent. On a technical basis, shares have gotten to overbought levels. 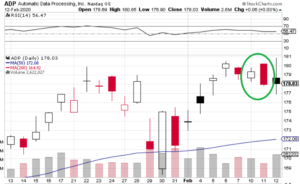 The appearance of this engulfment pattern suggests a pullback in the coming weeks.

Investors who have ridden shares higher in recent weeks may want to take profits, as the current rally is likely to cool.

Speculators could buy put options to bet on a drop in shares, likely to the low $170 range. That price point would partially, but not completely, reverse the prior rally trend.

For an options trade, the May $170 puts look like an attractive play. The option trades around $3.80 right now, but on a drop in shares in the next few days could deliver a quick 20-30 percent upside for buyers.

The engulfing pattern is a short-term one. We expect this decline to play out in the next few days to few weeks, but not over the next few months. Put option buyers would be wise to take profits quickly and move to the next trade.