While that may have a negative connotation elsewhere, in a chart pattern, a hammer may be a sign that a stock is nearing the bottom end of a trading range. Given TE’s recent decline, this is a sign that shares are ready to reverse higher.

On a candlestick chart, the hammer appears when a company’s share price declines during the day. But then it finds strength near its opening price or higher. 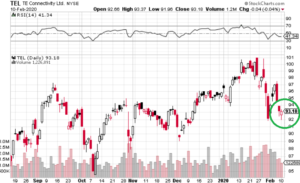 The effect, with a moderate box on top and a long stick on the bottom of the candlestick chart, is unmistakable. And with traders clearly testing the waters to send shares lower but not getting any volume there, traders will start to bet on an upside instead.

This suggests that TEL may be about to reverse its recent declining pattern and head higher.

Based on the company’s chart over the past year, the company has a number of small uptrends and downtrends. These have occured with shares gradually heading higher over time.

Shares are currently down about 7 percent from their last peak in mid-January. In a reversal, we would expect a move towards retesting that high, around $100 per share.

Speculators can buy the April $100 calls, trading for about $0.85 or $85 per contract right now. We would target a high-double or low-triple digit gain on this option. Trying to hold the options until expiration could prove dicey given the price volatility.

The company next reports earnings in late April as well, but given the average swing in shares, the next upswing in price will likely have occurred before then.