Shares of Microsoft (MSFT) have been bullish lately. One technical indicator suggests that shares may have gotten ahead of themselves.

That indicator? The relative strength index, or RSI.

It’s an indicator that shows recent price momentum, combining volume to determine the magnitude of the change. It’s measured on a scale of 1 to 100, where 50 is neutral. At a reading of 30, a company is considered oversold. At 70, a stock is considered overbought.

Right now, Microsoft’s RSI has reached a reading near 80. That’s a level of extreme overbought levels in shares. 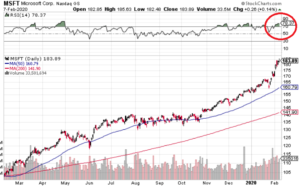 Shares of the software giant up 73 percent in the past year.

And they’re going like gangbusters after reporting great earnings, mostly with its cloud-services division. In short, traders may have gotten too bullish on the company’s prospects in the next few weeks.

A high RSI is not a guarantee of an immediate change. However, companies that get overbought tend to take a breather for a few days. Or even end up pulling back and underperforming the overall stock market for a few days or weeks.

For Microsoft, prior readings around 80 have led to a 6-10 percent pullback on average. However, most of those readings occurred in the 1990’s.

This opens up a myriad of trading possibilities.

As an immediate trade, shares may offer a shorting opportunity in the next few weeks.

A trade like the April $160 puts, currently trading for around $1.15, could be good for a 20-30 percent jump. That only requires a few bearish days for shares.

Many investors like to avoid trading on the short side. Fortunately, the high RSI at Microsoft offers opportunity there.

For traders still bullish, a pullback in shares—or a few flat days—until the RSI gets back under 50 should make call options cheaper to the point where a new long position in shares makes sense. A trade like the July $185 calls may drop from around $11.40 right now to under $10, and maybe even under $9, making for a better entry point.