One of our favorite unusual chart patterns is the golden cross.

When traders see this move, they know that an existing move higher in shares already underway is likely to continue.

It’s a great multi-week or even multi-month trend that can play out a bit more slowly than other technical indicators. 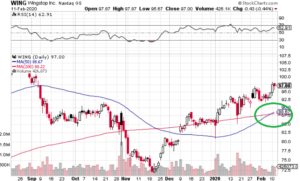 The restaurant chain was in a downtrend from the summer until late November, but is now in an uptrend.

While a golden cross doesn’t give any indication as to how long or how far such a move will go, we expect shares will make a run from their current price near $97 to at least $105.

At that price, shares will start to face resistance as they near the company’s prior high.

Still, that means investors have a high likelihood of scoring 8 percent gains in shares in the coming weeks. If shares break through the old high, returns could move even higher, possibly to $110 or $115 in today’s bullish markets.

Traders should look at the June $100 calls. Trading for around $7.90 per contact, they could move 30-40 percent higher on an 8-10 percent move in shares in the coming weeks.

Remember,  a golden cross indicator can play out over a few weeks to a few months. That should be enough time to lock in a reasonable gain on this options trade.

If the company moves higher but doesn’t break too much higher, the option’s time premium will eventually start to decay. At that point, investors will want to get out of the trade. But traders can likely take their profits well before expiration.

Shares may also be volatile in the next week as the company is set to report earnings on February 19th.