Bank of America Corp (NYSE: BAC) was able to clear its $25 resistance on Wednesday following the FOMC statement and subsequent press conference with Fed Chairman Jerome Powell. Powell promised to use his full toolbox and promised to keep zero interest rate policy until the economy picks up among other measures. The propping up of the market and trying to move the needle on steepening the yield curve may find banks wading higher in the near term.

While the measures taken by the Federal Reserve will affect all large banks like Bank of America similarly, it was the large share purchases by Warren Buffett’s Berkshire Hathaway that may be drawing the attention on investors over some other banks. 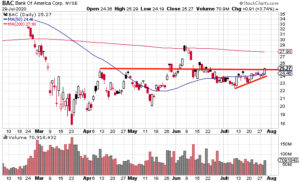 After the surge in price going into the June 5 high near $29, the share price of BAC along with most of the rest of the sector began to fall back. The price began to stabilize leading into and following the earnings. Since the July low near $22.39, the price has had a series of smaller and higher lows leading into the $25 resistance.

The 200-day is currently around $28, which is $1 below the June 5 high. In the near-term that is a price level that could be targeted and would be based on a reversion to the mean.