Shares of Ulta Beauty (ULTA) have risen in the past few weeks, and are starting to look overbought.

The beauty supply company has seen shares rise nearly 20 percent since the start of the year. Some traders think this can continue for a while. Why? Because shares are well below the company’s old 52-week high of $366.

However, given the strength of the move in the past few weeks, shares are reaching overbought territory on a technical basis. The company’s RSI has now topped 71, an overbought level. 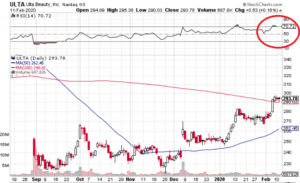 Remember, RSI or the relative strength index looks at how much momentum a company has had. After a big run, companies become overbought. Typically, that starts with an RSI reading of 70.

Given that the company has just topped an RSI of 70, there may be a little bit more upside. Today’s momentum trades can sometimes get a reading of 75 or 80 before they pan out and start to decline.

For Ulta, investors who bought in as a momentum play may want to scale back or sell out of their trade entirely. The easy money on the trade has been made, and holding now through a downturn could be dangerous.

For options traders, a put option trade against the company could prove profitable in the next few weeks. The June $270 puts look like a reasonable trade.

With a recent price around $15.70, a move to $250 by expiration could lead to a value of $20, for a gain of around 20 percent. That’s a solid return for an out-of-the-money trade, and one that will likely play out well before the June expiration.

We do not recommend directly shorting shares. Put options are cheaper, and don’t have the issues with margin calls that can plague shorting a stock directly. Furthermore, borrowing a stock to short it has carrying costs that make put options cheaper.