HP Inc (NYSE: HPQ) has found its way from its March low near $13 to the 50% retracement of the February sell-off at $18. That level was initially tested on March 26 but was retested again on July 15. Since that point, it looked like the price was ready to break resistance but on Tuesday the price broke a long-standing trendline drawn from the May 14 low. The breakout is confirmation of a pattern that is pointing to the price retesting the March low. 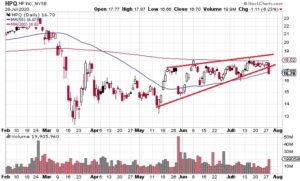 The series of higher highs and higher lows since early May is a pattern called a rising wedge. This is a reversal pattern that is an indication that the highs are advancing more slowly that the lows. The deceleration in the price is signaling a reversal in the trend. Tuesday’s breakout found the price closing below the lower trendline of the rising wedge on significant volume.

The breakout is occurring about three weeks before their earnings report on August 20 before the market opens. Analysts are currently estimating 2Q earnings per share of $0.43 compared to $0.58 last year. Over the past 30 days, the earnings have been stable, and the company has beaten analyst estimates for the past four earnings reports. However, the selling may be indicating some trepidation leading into the report.

The 18 SEP 20 $19 put is currently trading for around $3.00. The option has a 0.70 delta which provides a good proxy for a short stock position. The high delta means that the option will move about $0.70 for the first $1 of downward movement in the price. If the price falls, the option can be rolled to a lower strike for a credit. The roll allows the trade to remove risk. Consider rolling the option if the trade gains 30% or more.

Is it Time to Roll the Dice on Casinos: Wynn Resorts, Limited Stock (NASDAQ: WYNN)