Shares of Plains All American Pipeline (PAA) have been in a decline for the past few weeks. As a player in the energy space, shares have been hammered as oil prices have dropped significantly.

However, shares have now reached oversold levels after dropping over 15 percent since the start of the year.

One of our favorite oversold indicators, the relative strength index, hit an oversold level recently. Shares bounced higher after hitting a reading of 30, but still have a long way to go. 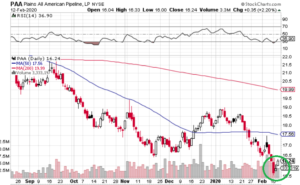 Other indicators, such as moving averages, also show that shares are in a deep bear market, and could recover to at least $17.50 from here, for a 7.7 percent gain. If shares move higher to the longer-running 200 day moving average, shares could provide a rally as much as 23 percent.

Because the pipeline company is structured as a limited partnership, investors who buy shares can obtain a large income, currently near 9.1 percent annually. Buyers here would also likely get the benefit of the company rebounding from its oversold levels. We like shares up to $16.50 as a rebound play.

Traders looking for faster returns should look to the options market instead. While riskier, with shares already oversold, a short-term bounce higher could provide sizeable profits in short order.

Should shares try to make a run in the next few months to $20, the options could move nearly five-fold higher to $2.50. That makes this trade attractive on a risk/reward basis given the likely bounce in shares.