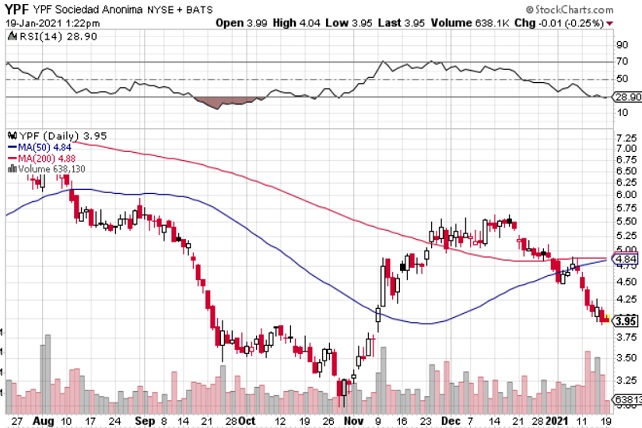 While the energy spot has been hot, one company has bucked the tend—strongly. The company is Argentinian firm YPF Sociedad Anonima (YPF). The company has run low on cash to pay bondholders, and the stock price has dropped correspondingly.

That’s created one of the few oversold opportunities in the market right now, at least on a technical basis. Without cash to pay bondholders, the company may need to issue stock to placate them. The alternative if that deal can’t be reached is bankruptcy.

Clearly, investors can potentially make a bundle on shares either way. With oil prices rising and economic uncertainty waning, however, traders might want to take a speculation on a recovery in shares.

Action to take: At around $4.00, shares are inexpensive enough to avoid having to deal with the hassle of options. The stock has traded as high as $10 in the past year, and a buyout offer from a bigger oil play could lead to some kind of large one-day move higher in shares.

For traders, the July 2021 $5 calls, which last traded for about $0.45, are an inexpensive play with the possibility for triple-digit gains on a rebound in shares. Whether that happens from the company righting the financial ship, or from a further move higher in oil, there could be big profits. The best news? If that doesn’t play out, the losses will be minimal.