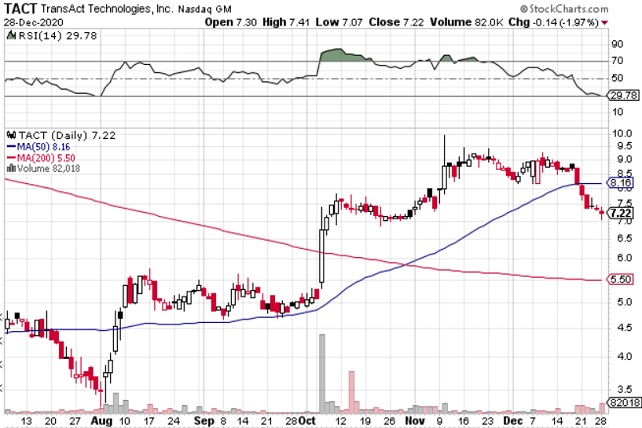 In a market flirting with all-time highs, only a handful of stocks look oversold. Besides a number of faltering funds trying to short the market, only a few companies make the list—and look poised to move higher. One such name? TransAct Technologies Incorporated (TACT).

The $70-million sized company is in the business of developing specialty printers and terminals, largely for labels and transaction records. With a decline in physical shopping this year, the company has struggled. Earnings are down 34 percent in the past year and the company is losing money.

With the vaccine and an increased use of products for e-commerce, however, shares look oversold even as earnings are about to rebound.

Action to take: Investors interested in small cap stocks should look at shares up to $7.50. There’s a good upside potential in the next year or so. For traders, a shorter-term bet from a move off of oversold levels looks attractive.

The April 2021 $7.50 calls are the at-the-money trade. Last going for about $1.25, traders could be looking at a mid-to-high double-digit return on a move higher. There could even be a double or better in the option if a big move occurs well before the April expiration.