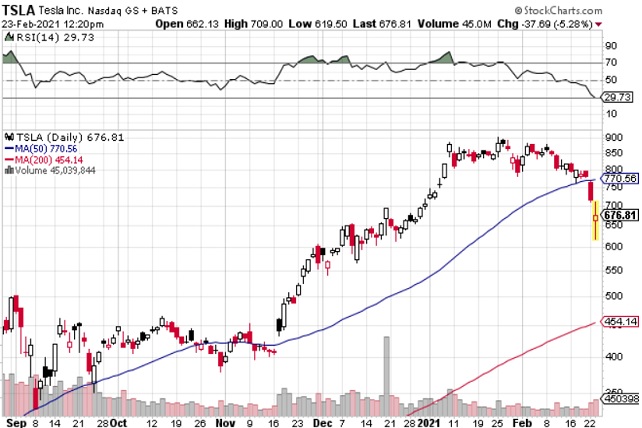 Shares of electric vehicle giant Tesla Motors (TSLA) had been sliding in recent weeks. But the past two trading sessions saw shares drop as much as 18 percent lower. Naturally, that’s created the first oversold opportunity in shares in months.

With a drop to the $630 range from an all-time high of $900, the company gave up all its gains year-to-date. And all the gains since it joined the S&P 500 index. Shares saw their relative strength index, or RSI, drop under 30 in intraday trading. That’s right at oversold levels.

The selloff occurred as Bitcoin prices dropped as well. While some made that connection, shares had been well off their highs since before the company put down $1.5 billion in the cryptocurrency. And the company is still well up on that trade.

Action to take: The company has been performing well operationally the past few years. Even with some occasional bad news, shares have always managed to shake off the fears and head higher. While there could be further downside, this latest selloff is looking nearly overdone.

The July 2021 $900 calls are a bet on shares moving back higher. This trade will move in-the-money if shares make it back to their old all-time highs. Even if they don’t, traders can likely grab some quick double-digit profits on the trade. The options last traded for about $57.00.