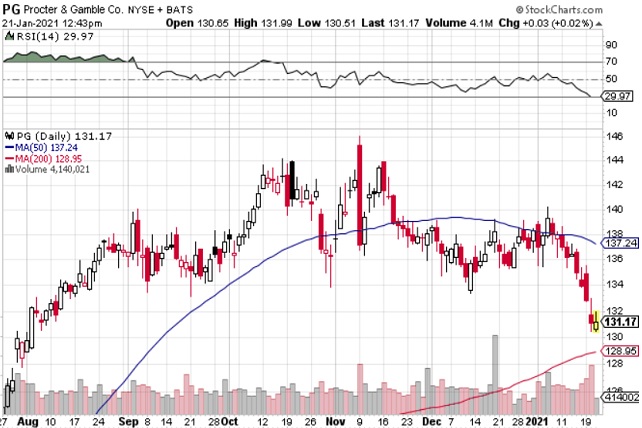 The stock market rally has not been too kind to defensive plays such as consumer goods companies. An open economy means more spending out of the home rather than in the home. But demand for consumer goods never goes away, which is why oversold blue-chip Procter & Gamble (PG) looks attractive now.

Shares have declined nearly 10 percent since early November, a big move for the company. The stock is now up only 5 percent in the past year, underperforming the overall stock market substantially.

That’s also put shares near a six-month low. The stock’s relative strength index, or RSI has dropped to 30 before a slight rally in shares. With the stock close to its 200-day moving average, but now well under the 50-day, there’s a possibility that shares will move higher from here.

Action to take: Investors who buy here can lock in a 2.4 percent dividend yield. It’s not huge, but the company has maintained and grown the dividend during the pandemic. That’s an impressive feat, and great for ultra-long-term investors.

For short-term traders, a rebound is likely in the coming trading sessions. The April $135 calls, trading for just under $3.40, can deliver mid-double-digit profits on a move higher in shares. The strike price is still under where shares traded before their recent selloff.