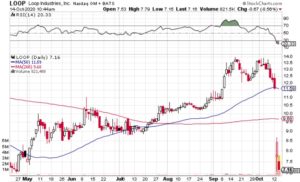 Shares of Loop Industries (LOOP) have been crushed in recent sessions. Shares are down nearly half since the start of the month.

The drop comes after a short seller reports that the company’s recycling technology for reclaiming plastic is nothing more than fiction. The selloff has been exacerbated by the company’s lackluster response.

Naturally, this has led to shares reaching oversold levels on a technical basis. Shares are now well below their moving averages, and the 50 percent plunge has taken the relative strength index to 21. That’s a low level, and some kind of move higher should be in the cards.

Shares can move much higher, and quickly. But it depends on a better response from the company regarding the allegations of fraud.

Even with the massive drop in shares, the company has only seen a 27 percent drop in the past year. As an early-stage company, the firm was not yet profitable. More interestingly, corporate insiders own 70 percent of the company. That means they have a lot to lose if the short-seller report is true.

Action to take: The short seller may have built a short position then released its research as a way to “talk its book” and start making money on the downside. Looking at the business potential, and the high degree of insider ownership, some kind of bounce higher seems likely in the coming weeks.