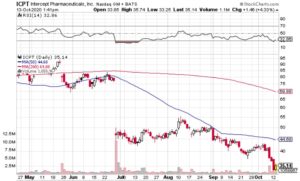 That allowed the company’s relative strength index (RSI) to fall to a low of 30 before an attempt at a rebound on Wednesday. That’s a classic oversold reading.

Action to take: While an oversold stock is likely to bounce, any rally here may be short-lived. The company is in the early-stages and is losing money hand over fist right now. The company’s finances aren’t in terrible shape, with cash on the balance sheet matching total debt. However, the company is likely to continue burning through cash quickly.

What’s worse, earlier this year shares dove as the company failed FDA approval on one of its most promising drugs. If anything, the stock coming off oversold levels will simply set the stage for a further decline.

While shares may have a good day or two in the upcoming weeks, chances are the longer downtrend will continue. Traders should buy the March 2021 $30 puts. They’re near-the-money with a bid/ask spread near $5.80. They should continue to appreciate in value, offering mid-to-high double-digits as shares continue their drop.