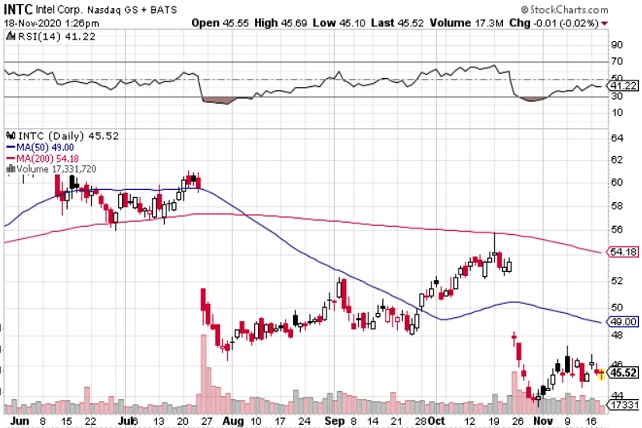 Computer chip giant Intel (INTC) is one of the few tech names not at or near an all-time high. While shares aren’t as deeply oversold as they were at the start of the month they’re still oversold. On a technical basis, however, they are starting to inch higher.

Shares have moved modestly up from their recent low set in late October. That’s helped to move shares off heavily oversold levels as measured by the relative strength index, or RSI. However, shares are still well under their 50- and 200-day moving averages, indicating more upside from the recent moves higher.

Action to take: Share are attractively priced at 9 times earnings and with a dividend yield of 2.9 percent. Investors may want to add shares now that they’re starting to trend higher.

For traders, the March 2021 $47.50 calls are an attractive trade. Trading for around $2.30, they stand a good chance of moving in-the-money, and even offering a triple-digit gain if shares move back to where the moving averages lie within the next few months.

This is probably the kind of trade that will take some time to play out, but historically the end of the year is a good time for a quiet rally in the stock market. The option’s expiration gives it plenty of time to play out before the time premium starts to work heavily against the trade.