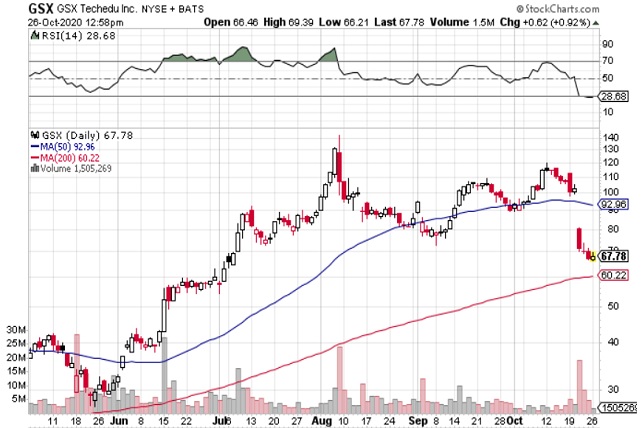 As a result of the massive decline, shares are reading as heavily oversold. The stock’s RSI, or relative strength index has dropped under 30, a classic oversold reading. Even with the large percentage drop, shares have rallied so strongly that they now trade at levels last seen in mid-June.

That suggests that traders who stick with the stock on the long side will be rewarded, even after the big drop.

Action to take: Besides buying shares to bet on a rebound, traders may like the April 2021 $90 calls. Even with the drop in shares, these calls still have a bid/ask spread around $11. That reflects some interest in a rebound in shares by traders already.

If shares were to rebound by their old highs by expiration, the option would be worth about $30, for a near-triple.

The company next reports earnings on November 20th, when the rumors will be settled one way or another. Traders may want to wait until then in the hopes of better prices, but the certainty will likely mean lower potential returns on trades by then. That’s especially true if there’s a big surge following earnings.