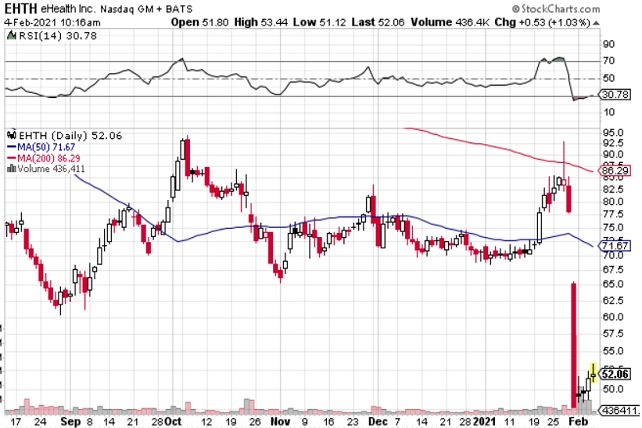 Shares of online health insurance company eHealth (EHTH) have dropped massively as the company announced it was having difficulty getting its operation to line up with government-approved plans such as Medicare. This led to a massive selloff in shares—but they’re already starting to recover.

Share dropped from a price near $85 to $50 on the news, but have started to trend back up in recent sessions. The stock’s relative strength index has now also risen to 32, just out of oversold territory. With the stock’s 50-day moving average in the $72 range, there’s likely tremendous upside from here.

The company is currently facing a major crisis, but it is a solvable problem. As the company moves towards resolution, its share price should recover as well. That can take months, so traders may need patience with this trade.

Action to take: Traders should look at the August 2021 $60 calls. Last trading near $10.60, they’re midway between the current price of shares and their lowest major moving average. Shares are likely to recover at least that much before expiration.

Any big move in shares could be delayed (or helped) by any change in the company’s operations, so targeting a specific profit on this trade may be difficult. Traders should get in now, ride the recovery, and look to take profits early.