Special: The Exact Day of the Next Stock Market Crash 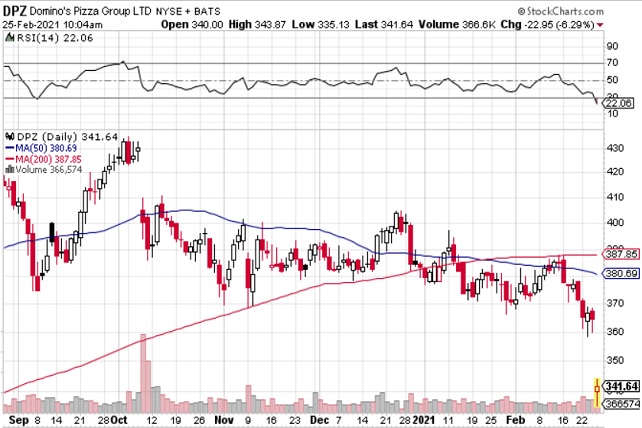 One of the few sectors that saw business improve during the pandemic was in pizza sales. With existing delivery infrastructure in place, these companies had an early lead. Now, with the economy looking to reopen, pizza chains are seeing a pullback.

Enter Domino’s Pizza (DPZ). Shares have been trending down for a few months. Following an earnings miss on Thursday, shares dropped even lower. They’re now down nearly 20 percent from their highs and into oversold territory.

The stock’s relative strength index got as low as the 19 range on Thursday. Any RSI reading under 30 is oversold, making shares look highly likely to partially rally from here.

Longer-term, shares did see a death cross recently, so look for a partial recovery, but not necessarily a surge back to new all-time highs.

Action to take: The April $370 calls saw a 62 percent drop when the company reported earnings. Now trading for about $5.50, thy can likely deliver mid-double-digit gains on a bounce higher in shares. That should occur in the next few weeks and well before the option’s expiration.

Given the longer-term trends in shares, traders might want to use any bounce higher to look for a further downside play. The June $330 puts last traded around $20 per contract, but could drop under $15 on a quick pop higher. That would make for a good entry point for playing the longer-term downtrend.