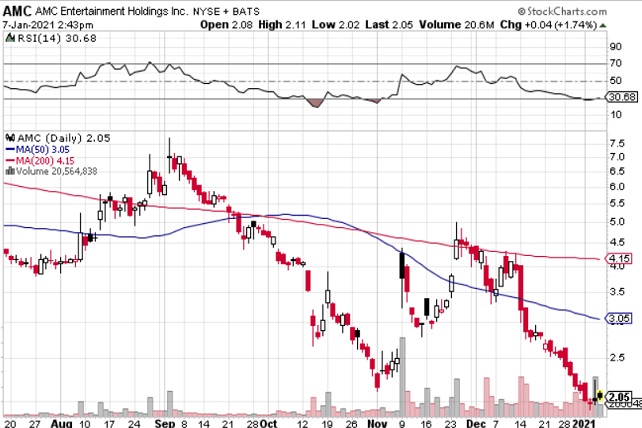 Theater chains have been more volatile than other companies. News of a Covid vaccine was good for a jump in shares. But as a vaccine has been delivered, some aeras are continuing with harsh lockdown policies. So it’s no surprise that companies like AMC Entertainment Holdings (AMC) continue to struggle.

Given the developments in the space, an oversold bounce higher looks likely. Previously, shares have moved from the $2 range into the $4 range for a double.

Action to take: Traders could simply buy shares here near $2.00. That price is cheaper than many options trades, and investors don’t have to worry about the time decay associated with options.

But, with a large prospective move in sight, the June 2020 $2 calls offer some leverage. Trading for $0.95, they’ve got a bit of premium to them. But on a run to $4, the options would triple, compared to a double for the shares themselves. For investors betting on a bigger move higher, this is the trade to make.