Shares of Ambev (ABEV) have been in a decline for the past few weeks.

Since the start of the year, investors have seen a drop of 22 percent.

However, the end of the decline may be in sight. The technical readings on the company have gotten so bearish that exhaustion and a reversal are the likely next moves.

The first indicator is the company’s RSI, or relative strength index. Many companies reach the oversold level of 30 and start rebounding. However, Ambev shares have been so bearish that the RSI has sunk to 20. 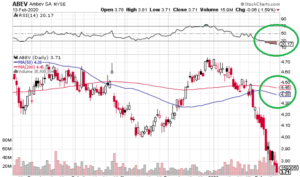 This suggests that traders and investors alike have been rushing to the exits. As the volume of sales declines, a strong bounce is likely. It’s akin to a rubber band being stretched before it snaps back.

With the low share price, traders could pick up shares and not have to worry about the time decay or IV crush that comes with buying options. Given the limited number of options trades available on this company, this may be the best bet.

Speculators willing to take the risk could do well with the April $5 call options. Trading for around $0.05, or a mere $5 per contract, they could double or triple on a strong bounce in shares and make for a great short-term trade.

The issue, however, would be making the trade without moving the option price too much, a reason why shares still look better to play the move higher.