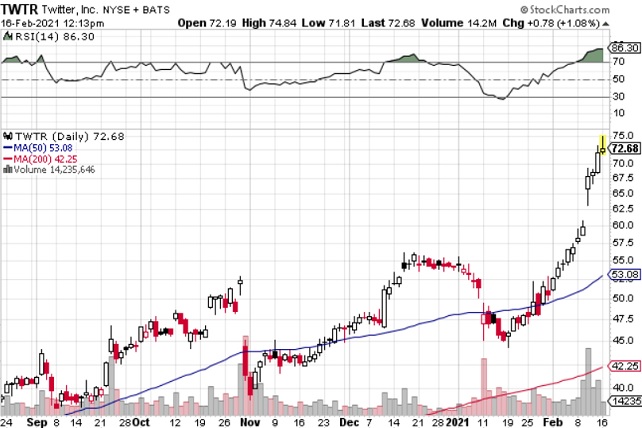 Social media company Twitter (TWTR) broker higher following an earnings beat last week—and shares have now moved into extremely overbought territory. The stock is ripe for a pullback, which at the very least could mean willing the recent gap higher.

The stock’s relative strength index, or RSI, recently topped 86. That’s well into overbought territory. More importantly, it’s the most the company has gone into overbought levels in the past few months.

Prior moves into overbought territory have usually led to some level of pullback, often of 10 percent or more. That’s enough of a potential drop to make a short trade attractive here.

Action to take: The June $65 puts look attractive here. Last trading for about $5.75, the $65 strike price is right near where shares saw their earnings gap higher. A quick move down to this level, even if shares don’t move quite in-the-money, could lead to a fast mid-double-digit profit.

It’s possible shares could move even lower. Prior pullbacks have been as much as 20 percent in the past few months. However, with overall bullish market conditions, traders should look for a 10 percent drop in shares as sufficient for making a quick profit on the short side. Traders should also use a 10 percent drop as a potential entry point for going long shares once again, to grab the other side of the stock’s next swing.