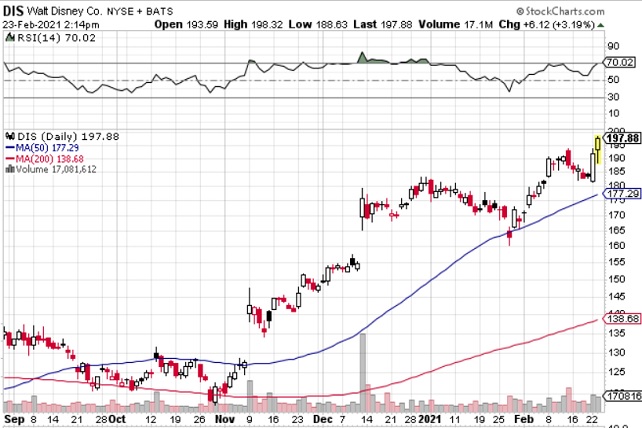 Even as markets have been dealing with losses in the past week, a few companies have bucked the trend with a move to a new all-time high. One such name? The Walt Disney Company (DIS).

The entertainment giant has done well with its streaming business. Now, with its theme parks likely to expand operations, shares look even better. However, they’ve also become overbought.

Shares just touched into overbought territory, as the stock hit an RSI, or relative strength reading, of 70. The move comes after shares rallied nearly 8 percent in the past two trading days. That’s a big move for a large, established media company. Shares also have a wide divergence on their moving averages, another sign of being overbought.

Action to take: The past few times shares have gotten overbought, they’ve tended to have either small drops or trade flat for a few sessions. With that performance in mind, traders looking to play the current uptrend will likely have an opening to buy cheaply.

The June 2021 $220 calls would represent about another 10 percent rally from here. Currently trading for about $11.50, a few weak days in the coming sessions could bring the option back down under $10, where it makes more sense as a buy with a continued rally in mind.