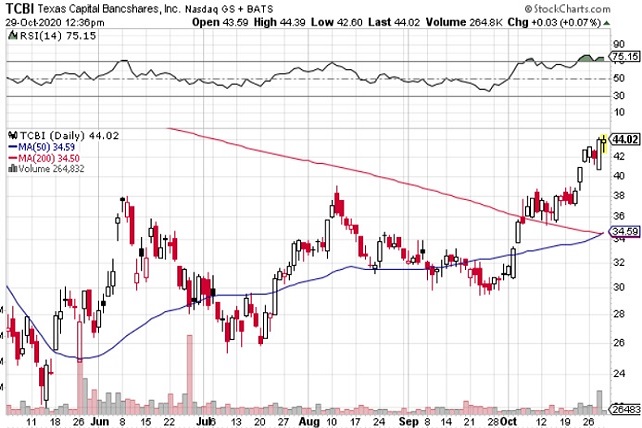 Bank stocks have generally been underperforming stocks as a whole in the past year. So it’s unusual to find a bank stock that’s overbought right now. But with shares of Texas Capital Bancshares (TCBI) up 46 percent since early September, there’s clearly an exception to the general market trend.

The regional bank has a large portfolio of business and commercial real estate loans. That has made for some trouble over the past year as the economy has endured unprecedented lockdowns. However, shares have shrugged off the worst of their market panic lows.

That’s now led to oversold conditions. Shares of the bank recently saw their relative strength index top 75, an overbought reading. And shares are more than 20 percent above their 50-day moving average, a rare occurrence.

However, that’s not necessarily a sign to make a short trade quite yet. Shares have also now experienced a golden cross, which is bullish over the longer term!

Action to take: Traders should look for a pullback in shares in the coming weeks to relieve the overbought action right now. But longer-term, shares could move higher. Traders should consider the June 2021 $50 calls, the farthest play out. While they currently have a bid/ask spread of $5.70, a short-term pullback should bring the trade into the low $4 range or under in the coming weeks.