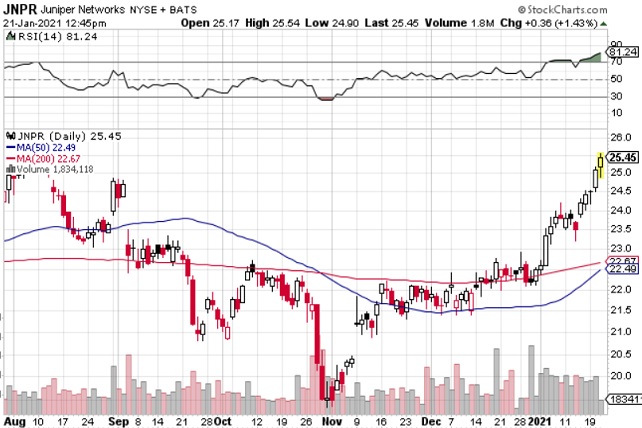 That’s most apparent from the stock’s relative strength index, or RSI. It recently topped 80, well into overbought territory. Shares could head higher for a few more sessions, as chip stocks tend to get much more overbought on average than other sectors—but the space is rope for a pullback.

Action to take: The March 2021 $22 put options have a bid/ask spread near $0.35. That makes for an inexpensive downside play that could even double if the stock hits the skids. Chances are traders will want to book a quick downside profit in the coming weeks.

Shares are more likely to pause or drop slightly before heading higher, so look at the short-term trend as a quick profit. Once that downside move does occur, look for a bigger trade on the long side. That’s because shares are nearing a golden cross, which tends to bode well for a stock in the months ahead.

Traders might want to have a target in mind for the next swing higher, such as the July $25 calls. Currently trading for about $2.30, they can probably be bought under $2 on a dip in shares.