Shares of Ingersoll-Rand (IR) have risen by over 11.5 percent so far this month.

That kind of move has resulted in a steep price chart. While not quite parabolic in nature, it’s steep enough that shares will likely face a sizeable pullback. When that happens, shares will give up most of the recent gains.

Technical indicators support that as well. Our go-to indicator for overvaluation in the short term, the relative strength index or RSI, shows a reading of 75. 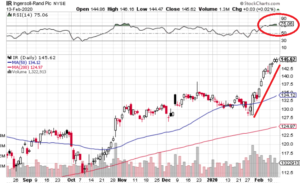 With overbought reading starting at 70, it’s clear that shares are definitely ahead of themselves.

We also have confirmation of the overbought trade by the MACD. That indicator shows that moving averages are getting unsustainably out of line with each other.

Add to that the fact that the rally has started to slow in recent sessions, and signs point to a potential downtrend. The trend will likely start within a few days.

We would expect shares to give back most of their gains. In terms of price, this means going from around $145 right now to the low $130 range. That’s about where they started their recent incredible run.

Investors who own shares may want to take some profits off the table now. Doing so means a chance to buy in about 8-10 percent more cheaply.

For options traders willing to bet on a decline, the June $135 put options, trading for around $2.55 or $255 per contract right now, would be the way to go. Yes, shares may not get to the strike price. However, this is an inexpensive play on a drop that won’t lose too much if shares keep going up in spite of the technical analysis.

In the best-case scenario, a move back to $130 means the $135 puts will be worth $5 at expiration, a near double. We like that balance of risk/reward, which can often be difficult with a trade betting against shares.