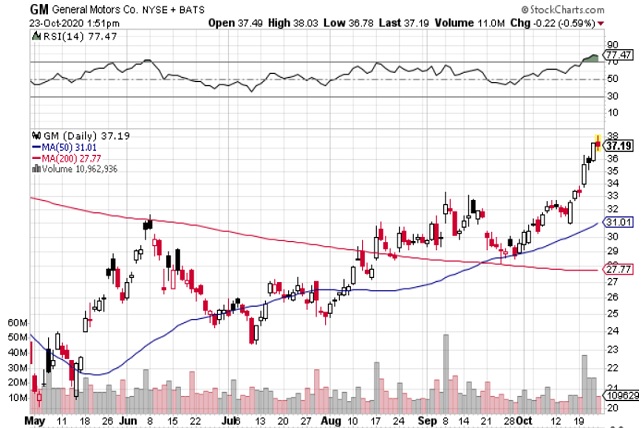 General Motors (GM) has seen its shares surge over 29 percent since the start of the month. That’s a huge move for a large-cap automaker, and naturally shares look overbought as a result.

That’s clear to see on the chart, where the company’s relative strength index, or RSI, has topped 77. That’s higher than the 70 level where most traders consider a stock overbought.

Further, the divergence from the company’s 50-day moving average has increased substantially. The more that divergence increases, the more likely a severe pullback like a stretched rubber band will occur.

This stretched valuation has now brought shares to breakeven over the course of the past year, unwinding the March meltdown in the stock. However, in the short-term, a pullback from here is looking increasingly likely. Friday’s decline may be the start of the stock coming off its overbought level.

Action to take: The January 2021 $35 put looks like a great trade here. The option last traded for around $2.25. But if shares head back to $30, about where they started their recent outperformance, the option could be good for a clean double. At the very least, a pullback should give these options buyers a high double-digit gain before the end of the year.