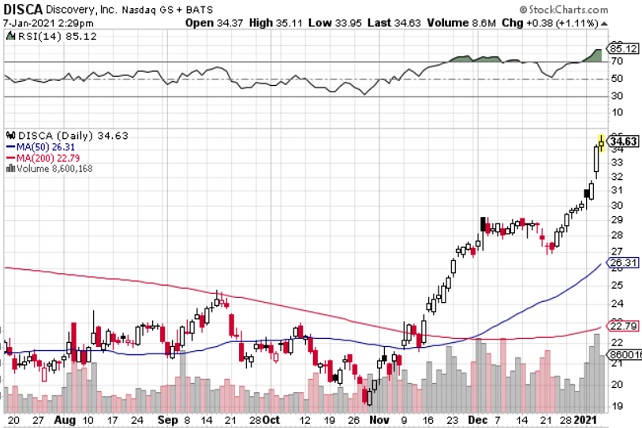 Entertainment company Discovery Inc (DISCA) has seen shares rocket in recent weeks. The company announced that it was introducing a streaming option for its various channels. With the launch of the service, shares have now surged even higher, getting into overbought territory.

The stock’s relative strength index has hit 85, well into overbought territory as shares have soared over 10 percent in the past week. In previous overbought conditions, shares have either traded sideways or dropped slightly before heading higher.

The company’s offerings include the Food Network, HGTV, TLC, and BBC among others. Shows from those channels are now available on Discovery Plus for $6.99

Action to take: Traders should expect either a small pullback or for shares to flatline. However, media companies that have been embracing the streaming model have been rewarded by the market with a higher valuation.

Consequently, despite being overbought, shares are likely to continue to trend higher. Traders should consider the July 2021 $35 calls. Currently just out of-the-money, the options last traded for about $4.20.

Traders should buy part of a position now, and use any weakness in shares or a slight pullback to buy more. The odds of this option moving higher with the share price in the next several months makes this an enticing buy now.