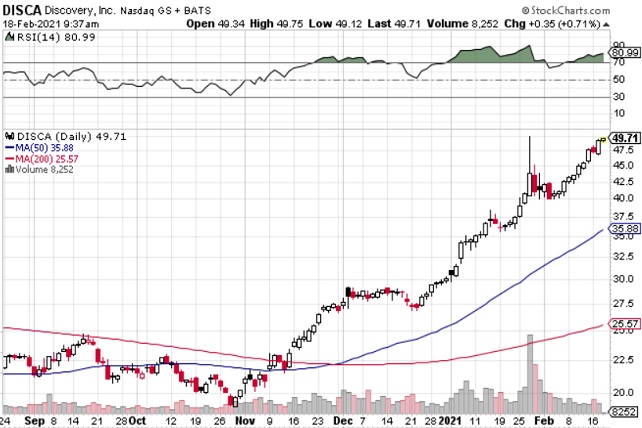 Media companies have had a strong year, as pandemic-driven trends have increased screen time. That’s created a number of strong rallies in a number of companies leading to periodic overbought moves. One such play right now? Discovery Inc (DISCA).

Shares have soared to $50 from $20 in early November, a 150 percent move higher. That move has led to a number of overbought conditions, which usually cause shares to trade flat for a few days, or slightly dip, before moving higher. With the stock’s relative strength index, or RSI, topping 82, shares are well into overbought territory once again.

Action to take: The strong uptrend appears likely to continue, although the stock’s trading history of the past few months suggests a few days of sideways trading or even a modest pullback. In other words, despite bring overbought right now, this is a poor candidate for going short, but makes sense for going long.

The July $60 calls currently have a bid/ask spread of $2.80, but on a few days where shares don’t rally could likely drop into the low $2 range. At that price, traders can buy call options and look to profit from the next move higher. The option even has a decent chance of moving in-the-money in the coming weeks after the next sideways move to take some of the recent froth out of the trade.