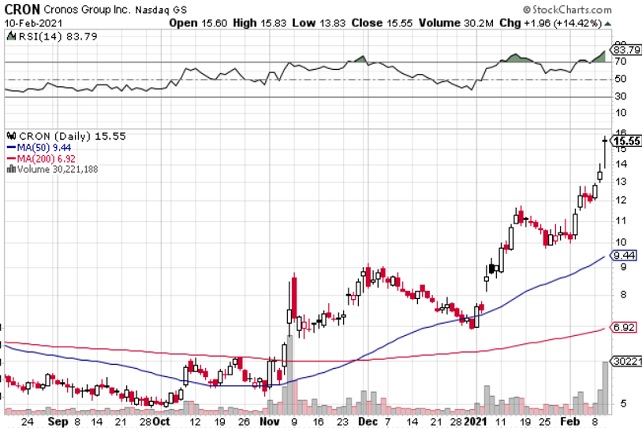 Marijuana-related stocks have been on a tear in recent weeks. It’s no surprise that the space looks overbought following a massive move higher. Case in point? Cronos Group (CRON).

Shares have doubled since the start of 2021, and are up nearly triple since November. Yes, the election outcome pointed to increased legalization at the state level, and federal marijuana laws will likely be relaxed. In any event, shares look heavily overbought. Cronos recently saw its relative strength index, or RSI, close in on 84, a record.

Part of the move in the space may be due to a gamma squeeze. That’s a phenomenon where buyers of out-of-the-money call options are so active that brokerages buy shares as a hedge. When those options trades expire or are closed out, however, it could be bad news for buyers today.

While there’s still likely some long-term upside in the space, the recent move higher has been too far, too fast. Thursday’s correction may just be the start of a further drop.

Action to take: The April 2021 $10 puts are a reasonable strike price and timeframe for a pullback to play out. Traders will pay about $1.03 for the options today, but can see a big profit on a drop in shares.

With how far the share price has moved in the past few months, a pullback to $10 could still leave shares in an overall uptrend. Traders should look for a quick profit in the span of a few weeks to avoid the effect of declining time premium.