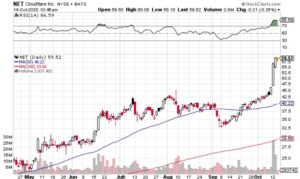 One of many hot-streak tech stocks, Cloudflare (NET) has seen shares rally 276 percent in the past year. And with shares up over 20 percent just so far this week, it’s no surprise that shares are reading as heavily overbought.

The company’s RSI just topped 88, an impressive showing as most companies start to see some selling pressure when the relative strength index hits 70.

Shares are now more than 50 percent over their 50-day moving average as well. That’s a high disconnect that poses a good chance of a pullback.

That’s in spite of the handicap that the company is still losing money. In terms of valuation, the past year has seen the company’s price to sales move from 20 times to 40 times, an extreme level considering the S&P 500 trades at a price to sales of 2.55 (a record high this century for that ratio).

Action to take: The February $40 puts are quite out-of-the-money following this week’s rally in shares. But at a price of around $1.75 per contract, they’re an inexpensive way to bet on the current rally ending and a moderate correction in the weeks ahead.

Traders likely won’t see the option move in-the-money, so look for mid-to-high double-digit returns as a sign to take profits off the table before expiration.