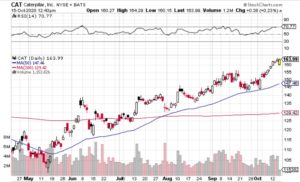 Heavy machinery has been a tough sell in the past decade. Yet despite a long, multi-year decline in such sales, shares of Caterpillar (CAT) have had a great run since the March selloff. Now, shares are getting into overbought territory.

Shares have been trending generally higher in the past few weeks with few down days. That’s been enough to send the company’s relative strength index, or RSI, up to an overbought reading near 72. A 10-15 percent pullback is likely, which would bring shares closer in line to the company’s 50-day moving average.

Action to take: The February 2021 $145 puts are an out-of-the-money trade that would move in-the-money if shares dropped under their 50-day moving average. That’s not impossible, but it is the kind of trade where it’s a good idea to take profits early.

At a price of around $6.40 per contract right now, it’s an inexpensive way to bet on mid-double-digit returns within the next few months as shares pull back from overbought levels.