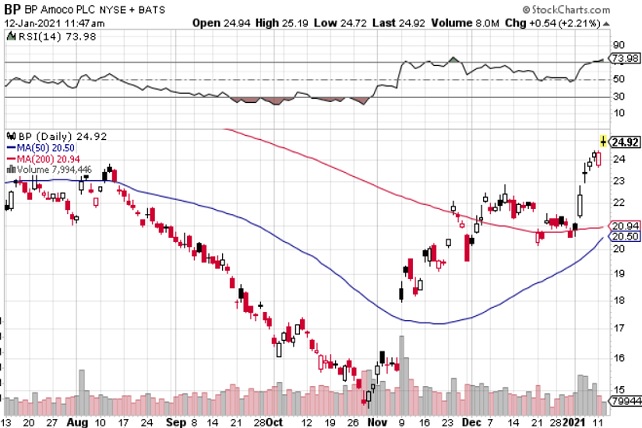 Energy giant BP (BP) has seen a major shift in shares in the past two months. Rising oil prices and favorable production cuts in oil have led to higher prices. Now, shares are actually showing overbought levels in the short-term.

The stock’s performance in the past few months shows it all. From a low under $15 at the start of November to a move to $25, shares are up over 60 percent in just two months. Now, the stock is showing a relative strength index, or RSI, reading of 74, just into overbought territory.

Action to take: Given the longer-term trends, traders should target the June 2021 $29 calls. Last trading for about $1.10, a short-term pullback under $1.00 should be a solid buying point for traders in the coming days. Traders can even add additional layers on a drop to $0.90 or lower.

From there, the longer-term trend will likely drive shares closer to $30, and traders should be able to grab profits in the coming months before expiration.

Unusual Pattern of the Day: The Trade Desk (TTD)