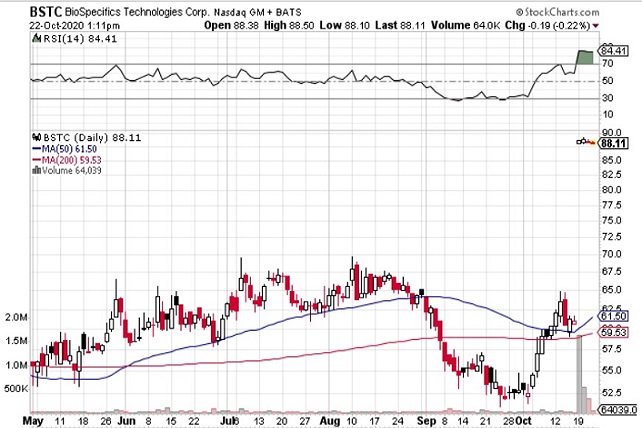 The recent market gyrations have led to only a few extremes. However, a recent surge in BioSpecifics Technologies Corp (BSTC), has sent shares to oversold readings.

With an RSI nearing 85, and a major jump in shares over 40 percent this week, it’s a classic look of an overbought stock. However, shares made their move following a buyout offer at $88.50 per share. The price has moved to nearly $88.25 per share as a result.

Action to take: Sometimes, a buyout offer can spur a higher offer from a competitor. This is unlikely with this small biotech play. However, shares may drift down in the coming days, or if the market goes south, as traders lose faith in the deal going through.

Traders who buy now expect to earn about 25 cents per share as the deal concludes. Should there be a wider gap, say, on a drop to $85, traders who but would then be looking at a better profit in a short period of time. Betting on these deals is known in investment circles as arbitrage, and can be profitable.

For this trade, however, look for a lower price to get in. It may not happen, but if it does, making a nearly-certain small return in a few weeks or months can have a sizable annualized return.