There was significant bullish option activity on Monday in the Financials SPDR Select Sector ETF (NYSEARCA: XLF) and JP Morgan Chase & Co (NYSE: JPM) and Regions Financial Corp (NYSE: RF). This activity is occurring ahead of the FOMC policy statement on Wednesday that could help boost banks share price. The movement in the names above extended to Fifth Third Bancorp (NASDAQ: FITB) as it closed 5.75% higher on Monday. 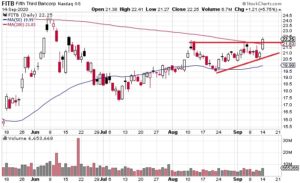 Chairman Powell is currently dealing with the conundrum that so many previous heads of the Fed have encountered. The conundrum is balancing all the stakeholder’s interests with a set of policy tools. For example, right now the U.S. Treasury yield curve isn’t in a great position for banks to make a lot of money lending. If the Fed looks to increase the inflationary outlook that would make it steeper and more beneficial for banks, the higher borrowing costs would be passed on to heavily indebted companies and the Federal government. That is quite a pickle!

That being said, the market is likely going to want some indication of both negative interest rate policy options and potential yield curve control. While it won’t be a fix, it may help drive share prices for the market and banks higher in the short run.

That is where the movement in financials and regional banks became interesting on Monday. There was unusual option activity in XLF, JPM and RF yesterday and the prices of these stocks rose. For example, 13,000 contracts of the 31 DEC 20 28/31 long call vertical were bought in a couple of prints on XLF. That is an expectation for the price of XLF to close above $31 by December’s expiration.

While FITB have any significant option activity, the share price closed 5.75% higher on Monday and broke resistance. The $22 resistance has been tested a couple times over the past month. As the price made two separate runs at that level, the lows continued to rise. The pattern of equal highs and rising lows is called an ascending triangle.