The hospitality company had been moving higher with the rest of the market in December and January. However, it has seen a disconnect in recent weeks thanks to the coronavirus outbreak.

Public health concerns have led to a drop in expected cruise volume, and many cruise lines serving China have suspended service. This concern has resulted in a slide in shares in the past two weeks.

For Norwegian, shares peaked around $60 in mid-January, and have now pulled back over 10 percent to around $52.

The company’s relative strength index, or RSI, dropped under 30. Remember, with RSI, 50 is a neutral rating, and stocks with a reading over 70 are overbought and under 30 are oversold. 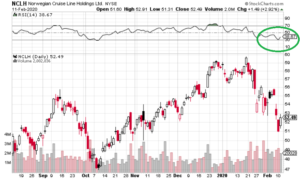 Given the high selling in recent days, we expect shares to recover most of that loss in the days ahead. Many other companies impacted by coronavirus fears have started to move higher. Tuesday’s rally looks like just the beginning.

That’s despite the news out of China, which remains concerning. Travel and tourism names that have gotten oversold like Norwegian are the next candidates to move higher.

And fears in China have led to a slide in oil prices, which in turn likely means lower fuel costs for cruise lines going forward. This fact and the company’s oversold levels make for an attractive trade right now.

Speculators can buy the June 2020 $55 calls for around $2.80 right now. The calls could double if shares go back to their old highs.

While shares look oversold now, any coronavirus news may impact shares further. Traders may want to commit less capital to this trade than they otherwise would, given the non-market risks in this trade. Even with that warning, the rewards look good here.