After selling off in early August, the price of the 30-year U.S. Treasury bond has stabilized near a 1.50% yield. With so much uncertainty about growth and inflation, it makes sense that there may be some skittishness on the part of investors globally. However, Thursday’s Treasury auction for 30-year bonds saw solid demand as stocks are wavering and the Fed is in a holding pattern. On the news, iShares 20+ Year Treasury Bond ETF (NASDAQ: TLT) found a bid early in Thursday’s session and made a bullish reversal. 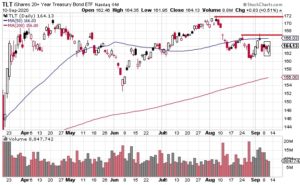 “We got into a zone close to 1.50% on the 30-year bond with the lack of any inflation and a stock market that might start wobbling a bit into the September/October time frame ahead of the election. I think that there was a reason to sort of back up the truck and buy some long bonds.”

TLT began the day gapping lower from the previous session before rallying throughout the day. The body of yesterday’s candle “engulfed” the previous day’s candle. This means that the range between the open and close was wider than the previous day’s range. This candle formation is called a “bullish engulfing” pattern. This pattern is a confirmation of price support for the ETF.

The near-term projection of the price is to test the resistance near $167, but ultimately retest the high on August 6 near $172.25.