The evening star pattern is an irregular one. But it does tend to show a reversal is in progress.

The pattern is a bit complex. It takes three days to play out. On the first day, there’s a long thin candle. It shows a closing price far above the opening price without any unusual distribution of the trading volume.

The second day has a small candle pattern, known as a spinning top. On the third day is a long black candle, showing a trade going down throughout the day, also with no uneven volume.

This is a pattern that emerged on shares of Tesla Motors (TSLA) recently. 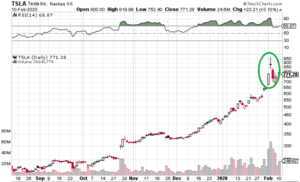 The company’s parabolic move upwards ended with the first of the three evening star patterns. Since hitting an all-time high over $940, shares sputtered and then dropped on the third day, completing this pattern.

This suggests that the big move up in shares is over. It’s now possible that much of the company’s gains in recent weeks may start to disappear as bears start to overwhelm bulls.

The complex pattern doesn’t give any indication as to the severity of a pullback. The emergence of the evening star pattern already left shares well off their all-time highs. We expect another 15-20 percent drop in the next few weeks would seem likely.

For traders on the long side who enjoyed the ride on the way up, simply taking profits now would be the best move. Even traders who are still long-term bullish on Tesla at these prices could do even better buying in at a lower price.

The large move in shares has led to an explosion in options premium. That makes trading a bit pricier than expected, even for put buyers. But for a 10-15 percent decline, consider the June 2020 $500 puts. They trade for around $23, or $2,300 per contract, and could give traders a sizeable profit on further drops in shares.