Shares of CoreLogic are heavily overbought.

Like many tech names in recent weeks, the monster rally in stocks are leading shares higher. For CoreLogic, shares have started to move at nearly a 45-degree angle. Anything higher would be parabolic, and a sign of an outright bubble.

Over the past few weeks, shares have repeatedly signaled overbought levels but continued higher. Right now, with a relative strength reading of 78, shares are heavily overbought. RSI typically reads as overbought with a level at 70. 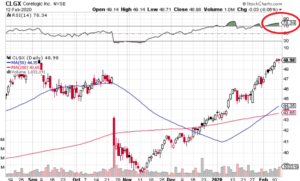 However, there’s more to this story. While overbought in the short-term, shares are likely to continue heading higher in the longer-term. So today’s holders of shares may want to stick through a mild drop.

The company is also trading far above its moving averages, having recently hit a golden cross earlier in the month. A golden cross is typically bullish over the longer term.

With these technical indicators in mind, we expect shares to trade weakly over the next few trading sessions, before heading higher.

For traders who have been riding the tech wave in the past few months, knowing when to take profits is crucial. By using these indicators to avoid losses on the market’s rare, down days, traders can buy back options much more cheaply.

For now, traders invested in CoreLogic already should consider taking profits now. Based on prior pullbacks, a 5-10 percent drop is likely before the upward trend continues. That will allow shares to “cool down” from overbought levels.

After a 5-10 percent drop, shares will likely head higher, passing $50. The window should open in the next few days for traders to buy the July 2020 $50 calls. Right now, they’re trading around $2.95. On a modest pullback for shares, investors could get in around $2.50 or lower.

If the company’s longer-term uptrend continues, the trade could easily double as shares would clear $55 by July.